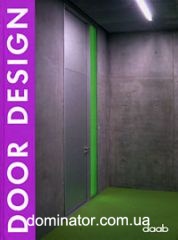 Характеристики
Оформление заказа
593грн.
Код товара: 14000569plkn
На складе: нет
Рейтинг:
Оплата
Доставка
Скидки
The door is the most essential component of a house. It is both a separating as well as an adjoining element and permits or prevents entering from an external area to the private interior. Doors are interfaces that are created to invite or reject, depending on the message that they are to convey to the outside world. Closed or open - doors keeps secrets that can make you curious, awaken positive expectations or can also invoke your fears. Although the entrance in the most cases is also the exit, both are generally experienced in different manners. While the entrance can lead to unfamiliar territory, exiting a house is always a return to a familiar environment as well.
Throughout the entire history of architecture, doors have been adorned with mystical impressions from religion, superstition as well as art and literature history. In the Christian world, the fiery dragon swallows the souls of the damned as the "porta inferi". The dark gateway opens the entrance to the underworld and only a narrow portal leads to the Gates of Heaven. In the architecture of the monarchy, the entrance door was mostly the middle axis of a symmetrical building which increased the representative effect. The number of doorways which had to crossed marked the status of a potentate. Thus petitioners were obliged to wait for long periods in numerous reception rooms before they were able to present their requests.
Since then, doors have become a vivid component of our language. We live "door-to- door" with people, have "opened the door" to something and in an extreme case, matters can be discussed "behind closed doors". In our daily dealings, for example in the working world or in our private living space, there is hardly a part of a building that we have in our hands more often than the door handle. The entire scale of modern design can be interpreted on the basis of the development of this element. Oversized and heavy doors and gates to public buildings can often only be opened with a great deal of effort in order to create a certain amount of distance. Store entrances on the other hand allow prospective customers to cross their thresholds with little or no effort and are sometimes opened as if by magic.
In addition to the optical and tactile appeals, doors also offer acoustic experiences. Just as with constructing automobiles, it is a symbol of solidity and high quality when the door closes with a rich, powerful tone. Transparent or hermetically sealed doors - the material, the technology and the design create the spatial "calling card" of a house. Doors are far more than just "movable barriers by which an entry is closed or opened" as they are referred to in specialized literature. They are projection areas for our desires and make up the character of facades and interiors.
Есть вопросы по этому товару?
Вы можете задать нам вопрос(ы) с помощью следующей формы.
Идет добавление товара в корзину...