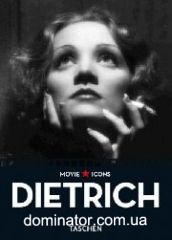 Характеристики
Оформление заказа
190грн.
Код товара: 22822111t
На складе: нет
Рейтинг:
Оплата
Доставка
Скидки
Marlene Dietrich once said, "I am not a myth." But by referencing the term, Dietrich only reinforces the fact more emphatically. For, using almost any common dictionary definition of that word, Dietrich is a myth. Her image was fashioned by director Josef von Sternberg in films like The Blue Angel, Shanghai Express, and The Scarlet Empress, after which she maintained a Hollywood career that included Destry Rides Again, Rancho Notorious, and an accomplished performance in Billy Wilder's Witness for the Prosecution. She has been an object of worship to millions throughout the decades, up to and including this jaded, post-modern 21st century. She is the "intellectual's pin up girl," as author Herman G. Weinberg called her, of filmmakers and film critics alike. She is the "Monstre Sacre" as one of her recent biographers has labeled her. She is her own "Superior Product," (her daughter's words) manufactured and refined in her fertile brain. In other words, Marlene Dietrich is an icon for all ages.

About the author:
James Ursini has co-written and co-edited eleven books with Alain Silver; Ursini and Silver are considered two of the foremost authorities on the subject of film noir. Among Ursini’s most notable works is the successful Film Noir Reader series. He has also contributed articles to various film magazines and has supplied the DVD commentary for numerous classic film noirs. He has a doctorate in motion pictures and has lectured on filmmaking at colleges in the Los Angeles area.
Есть вопросы по этому товару?
Вы можете задать нам вопрос(ы) с помощью следующей формы.
Идет добавление товара в корзину...