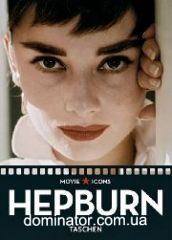 Характеристики
Оформление заказа
190грн.
Код товара: 22820018t
На складе: нет
Рейтинг:
Оплата
Доставка
Скидки
Her beauty has proved timeless—should we be surprised? Equally graceful whether moving or standing still, blessed with a balletic poise, luminous dark eyes, and an exquisite profile a queen might envy, Audrey Hepburn would no doubt have become famous in her youth even if the movies hadn't found her—simply because no self-respecting camera could resist her. What sets her iconic beauty apart now, for us, more than a decade after she's quit the stage of this life, is that her physicality is oddly secondary. Her extraordinary good looks merely halo a still-living smile.

About the author:
F. X. Feeney is a screenwriter and critic based in Los Angeles. His film credits include The Big Brass Ring, based on a story by Orson Welles, and Frankenstein Unbound, directed by Roger Corman, whilst his reviews have appeared in L.A. Weekly and other publications. F. X. has also written TASCHEN`s Michael Mann and Polanski.
Есть вопросы по этому товару?
Вы можете задать нам вопрос(ы) с помощью следующей формы.
Идет добавление товара в корзину...