DOMINATOR
American Ads of the 1980s 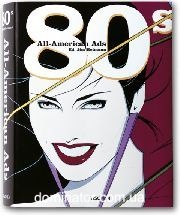 Характеристики
Оформление заказа
658грн.
Код товара: 22838334t
На складе: нет
Рейтинг:
Оплата
Доставка
Скидки
With the cold war ebbing, crime and inflation at record levels, and movie star-turned-President Ronald Reagan launching a Star Wars of his own, the 1980s did not seem likely to become one of the most outrageous, flamboyant, and prosperous decades of the 20th century. The "greed is good" mantra on Wall Street spawned the power-dressing, exercise-obsessed "Me Generation" of Yuppies—high on cash, cocaine, and Calvins. The art world enjoyed the influx of capital; computers and video games ruled in the office and at home; and the Rubik`s cube craze swept the nation. Leg warmers were big, shoulder pads were bigger and hair was biggest of all. Whether your heart warms nostalgically at the memory of E.T., marathon Trivial Pursuit sessions, and "The Cosby Show"; if you think "Knight Rider," Alf, and break dancing are totally awesome; or Tiffany, baggy acid wash jeans, and Cabbage Patch Kids make you wanna scream, "gag me with a spoon," this book`s for you. To all those who still hear the echoes of "I want my MTV": All-American Ads of the 80s will leave you ready to reach out and touch someone. So just do it!

About the editor:
Jim Heimann is Executive Editor for TASCHEN America in Los Angeles and the author of numerous books on architecture, popular culture, and Hollywood history.

About the author:
Steven Heller, a senior art director of the New York Times and co-chair of the School of Visual Arts MFA Design program, is the author of over one hundred books on design, popular culture, and satiric art. In addition to writing for over a dozen TASCHEN titles, his recent books include Design Literacy Second Edition, Stylepedia, and The Education of a Graphic Designer.
Есть вопросы по этому товару?
Вы можете задать нам вопрос(ы) с помощью следующей формы.
Идет добавление товара в корзину...