DOMINATOR
All-American Ads of the 30s 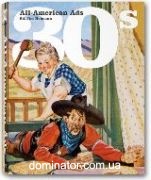 At the dawn of the 1930s, modernism started to influence the American advertising industry as waves from the European avant-garde movement made their way across the Atlantic. The trend of literal, uninspired print ads was shaken up by new stylized, symbolic, and even abstract advertisements that relied more on aesthetics than copy. These techniques worked well at first, and ultimately paved the way for advertising as we know it today, but were overshadowed by the need of a country in depression for hard-sell, shirt-sleeve advertising. Subtlety and irony could hardly sell products to a nation struggling to feed itself. Surprisingly, however, the ads of the 1930s reveal nothing of the hard times, painting instead an optimistic picture of affluent American family life. Cheerful and colorful, these ads served an important role as morale boosters, promising happiness and success to a country in crisis.About the editor:Jim Heimann is Executive Editor for TASCHEN America in Los Angeles and the author of numerous books on architecture, popular culture, and Hollywood history.About the author:Steven Heller, a senior art director of the New York Times and co-chair of the School of Visual Arts MFA Design program, is the author of over one hundred books on design, popular culture, and satiric art. In addition to writing for over a dozen TASCHEN titles, his recent books include Design Literacy Second Edition, Stylepedia, and The Education of a Graphic Designer.