DOMINATOR
All-American Ads of the 20s 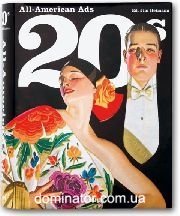 Prohibition made liquor illegal and all the more fun to drink. Speakeasies, luxury cars, women`s liberation, bathtub gin and a booming economy kept the country`s mood on the up-and-up. Women sheared off their locks and taped their chests, donning flapper dresses and dancing the Charleston until their legs gave out. Gangsters flourished in big cities and gangster movies flourished in Hollywood. It was the roaring twenties in America: a singular time in history, a lull between two world wars and the last gasp before the nation`s descent into the Great Depression. Forging the way into the future like a modern ocean liner in a sea of antiquity, advertising in the 20s sought to bring avant-garde into the mainstream-which it did with great success.About the editor:Jim Heimann is Executive Editor for TASCHEN America in Los Angeles and the author of numerous books on architecture, popular culture, and Hollywood history.About the author:Steven Heller, a senior art director of the New York Times and co-chair of the School of Visual Arts MFA Design program, is the author of over one hundred books on design, popular culture, and satiric art. In addition to writing for over a dozen TASCHEN titles, his recent books include Design Literacy Second Edition, Stylepedia, and The Education of a Graphic Designer.